by The Federal Aviation Administration (FAA) 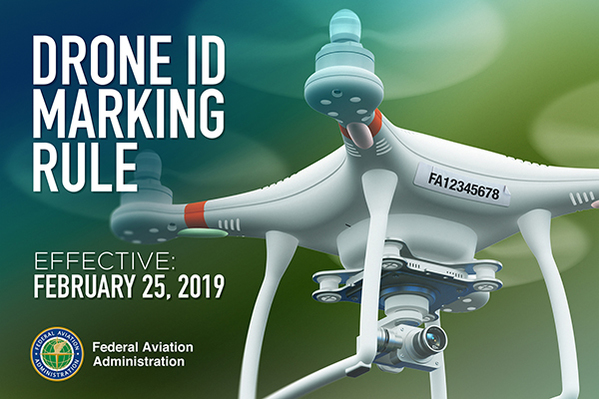 The Federal Aviation Administration (FAA) posted a rule in the Federal Register requiring small drone owners to display the FAA-issued registration number on an outside surface of the aircraft. Owners and operators may no longer place or write registration numbers in an interior compartment. The rule is effective on February 25. The markings must be in place for any flight after that date.

When the FAA first required registration of small drones in 2015, the agency mandated that the registration marking be readily accessible and maintained in readable condition. The rule granted some flexibility by permitting the marking to be placed in an enclosed compartment, such as a battery case, if it could be accessed without the use of tools.

Subsequently, law enforcement officials and the FAA’s interagency security partners have expressed concerns about the risk a concealed explosive device might pose to first responders upon opening a compartment to find a drone’s registration number. The FAA believes this action will enhance safety and security by allowing a person to view the unique identifier directly without handling the drone.

This interim final rule does not change the original acceptable methods of external marking, nor does it specify a particular external surface on which the registration number must be placed. The requirement is that it can be seen upon visual inspection of the aircraft’s exterior.

The FAA has issued this requirement as an Interim Final Rule—a rule that takes effect while also inviting public comment. The FAA issues interim final rules when delaying implementation of the rule would be impractical, unnecessary, or contrary to the public interest. In this case, the agency has determined the importance of mitigating the risk to first responders outweighs the minimal inconvenience this change may impose on small drone owners, and justifies implementation without a prior public comment period.

The FAA will consider comments from the public on this Interim Final Rule, and will then review any submissions to determine if the provisions of the ultimate Final Rule should be changed. The 30-day comment period will end on March 15, 2019. To submit comments, go to http://www.regulations.gov and search for “RIN 2120-AL32.”

As Transportation Secretary Elaine Chao promised last month, the FAA also posted proposed new rules to let drones fly routinely at night and over people, and to further integrate them safely into the nation’s airspace. The comment period for these proposals is now open and ends on April 15.

As a Senior Producer/Editor for a government contractor in Northern Virginia, Jeff assisted in the creation of their media department from the ground up. Prior to that, he was a Senior Video Production Specialist and Team Lead for the Department of Defense with more than ten years of consistent production, editing, video and audio recording experience. Jeff specializes in identifying, developing and supporting new trends in visual media technology and other solutions. Outside of the workplace, Jeff created a long-form documentary about the rise of a local boxer, Tori Nelson, to 13-time world champion status across 4 weight classes. It aired nationally via the Sports Channel For Women and screened at The Alexandria Film Festival and Texas Black Film Festival. Jeff is co-producing "The Lost Clipper," a two-decades documentary about the first hijacking in U.S. history and the search for those 15 lost souls taken in 1938. Filming takes him to Micronesia, Guam, Hawaii, Canada, and locations across the U.S. He enjoys creating a media-marketing social networking campaign for entities such as CapitalTristate Electrical Distributors and "The Lost Clipper" and personalities such as world boxing champion Tori Nelson, Netflix's "Narcos" personalities Steve Murphy and Javier Pena, and renowned landscape photographer Frank Lee Ruggles. Solving complex technical problems by utilizing a myriad of advanced audio-video hardware and software applications along with initiative and ingenuity, Jeff is eager to attack any project head-on. Jeff's Motto: think beyond convention...and consider it done!
Loading Comments...
%d bloggers like this: